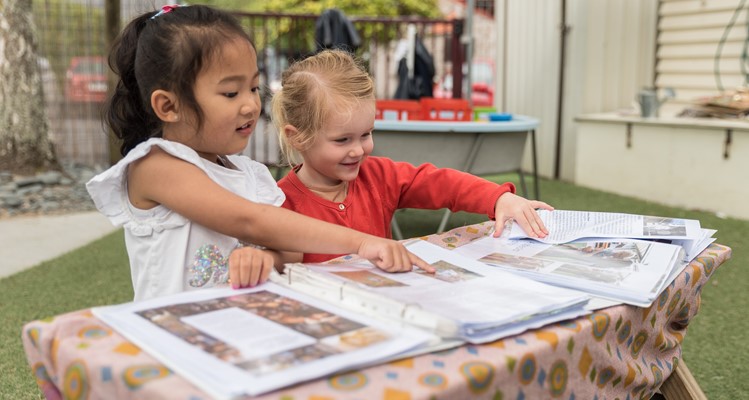 In one variation or another, it’s a question that we get asked a lot. It’s usually a point of curiosity, sometimes paired with a little concern, especially if the child doesn’t seem all that interested in others while so many children around them are. Parents worry. That’s what parents do. But in this case, there usually isn’t a need to.

Children start playing with others when they’re ready.

In its social aspect, children’s play goes through six stages:

It’s only around the fourth stage — parallel play — when we would expect children to start forming something that may resemble a friendship. At this stage, it’s likely to be a play mate with whom they play alongside because of a shared interest. The more it happens, the more likely that the children will begin to bond, and as the children move from parallel and into associative and cooperative play, this bond will strengthen. It can be a quick process or it can be a lengthy one. There is no set time frame on how long it takes to build a friendship.

It must also be said that these stages are not a checklist that children tick off and abandon while building towards the last one. While an older child may be capable of cooperative play, it doesn’t mean that they cannot play individually — it’s a healthy thing to do for anyone. When settling into a new setting, they may prefer to play individually while getting their bearings. After that, they may move onto onlooker play before joining in with others. Even unoccupied play will be visible throughout a person’s life and well into adulthood — there are sports that are often approached in such a way.

At their own pace

If you were to google ‘six stages of play’, the results would have these paired with an expected age range. While these may be fairly accurate when it comes to describing an ‘average’, they can be hugely misleading when it comes to individuals. Every child is different. It’s a statement we repeat over and over, yet, we hope that our child is different in a way that means they can do everything earlier than others. When they don’t, it causes us worry. But why?

While some children will be drawn to select friends at three, others may not be interested in anyone else until they’re nearing five — something that may also vary from day to day. They may not have made their way through all stages of play yet and therefore aren’t quite ready to cooperate with others, or they may simply prefer individual play at this time. This is not a reliable indicator of what they will be like in 10 years time. Every child is different

Being in an environment where they feel empowered and which they share with peers is the most important aspect of developing social skills. Friendships are built organically through shared interests and experiences, and it’s not something that we can force. We can encourage it, and at Little Treehouse, we do. We draw the attention of nearby children to things that others are doing. We place resources in ways that encourage interaction and sharing. We prompt children to help one another if need be and often redirect their questions to nearby peers. If we feel like an individual child could use extra support, we discuss it in our weekly planning meeting and make strategies as to best support them as an individual.